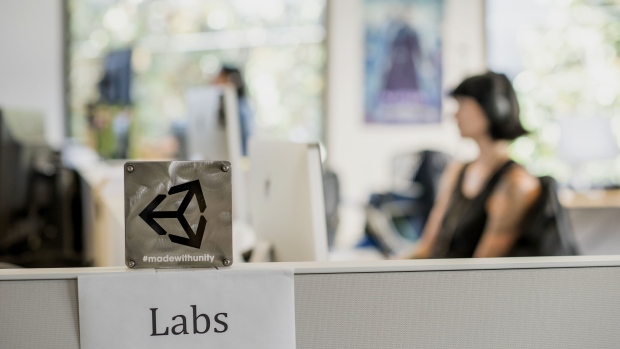 (Bloomberg) -- AppLovin Corp. made an unsolicited proposal to merge with Unity Software Inc. in an all-stock deal valued at $20 billion, potentially upending Unity’s plan to buy a competitor.

AppLovin, which markets software platforms for app developers to help them find customers and bring in revenue, is offering gaming platform Unity an alternative to its recently announced $4.4 billion deal to buy IronSource. The deal proposed Tuesday is structured as a takeover that allows Unity to run the combined company.

Unity, whose software underpins many of the most popular video games, agreed last month to buy AppLovin rival IronSource to boost its advertising technology, which has suffered under changes to data tracking by Apple Inc. The merger proposed by AppLovin would be contingent on Unity canceling its agreement with IronSource, according to a statement.

AppLovin, whose shares are down 62% this year, is seeking to capitalize on the growing demand for three-dimensional gaming, which is a specialty of Unity. The Palo Alto, California-based company proposes that Unity Chief Executive Officer John Riccitiello would be head of the combined business and AppLovin’s CEO Adam Foroughi become chief operating officer.

“We believe that together, AppLovin and Unity create a market leading business that has tremendous growth,” Foroughi said in the statement.

AppLovin shares fell as much as 16% on Tuesday in New York. As of mid-morning, the stock was down to about $36, putting it’s current offer while Unity gained 1.9%. IronSource tumbled 10%.

Riccitiello, speaking on a conference call after Unity released its results Tuesday, acknowledged that AppLovin’s proposal was received, but declined further comment.

“Given its proposed deal for IronSource, we believe it’s unlikely for Unity Software to accept a seemingly hostile bid from AppLovin,” said Bloomberg Intelligence analyst Mandeep Singh. “A merger between AppLovin and Unity could help increase their first-party data to offset headwinds from Apple’s privacy changes, yet there will likely be a high overlap between IronSource and AppLovin’s ad-tech platforms, and the combined company may have to carry out a large restructuring down the line to cut costs.”

Backed by Sequoia and Silver Lake Partners, Unity hasn’t been immune to the economic forces roiling the broader tech sector and gaming in particular. The industry is seeing a post-pandemic slump as people return to the office and other activities, while there has been a dearth of major new gaming titles this year and new consoles from PlayStation and Xbox have been hard to get due to ongoing supply chain issues. This year has also seen some of the largest video game deals and there are more likely on the way.

Unity’s advertising and monetization products have been under pressure ever since Apple made it harder for companies to track ad views across mobile devices. In July Unity lowered its annual revenue forecast and its stock is down more than 63% this year. In addition to the dismal earnings report, Unity last month announced plans to cut 4% of its 5,900 employees internationally. IronSource, which competes with AppLovin, provides ad technology and gives game developers tools to find customers, make their games stickier, and earn money faster.

In July, Riccitiello used harsh words to criticize developers who didn’t begin planning their games with monetization in mind, prompting a severe backlash and forcing him to apologize.

Riccitiello has led Unity since October 2014. Before that, he was an executive at Electronic Arts Inc., where he was CEO from 2007 to 2013, overseeing a shaky, transformative era for the video game publisher that saw shares fall from a high of $60 at the end of 2007 to $11 in mid- 2012. Under Riccitiello, EA acquired the mobile developer PopCap Games, struck a 10-year deal with Walt Disney Co. for exclusivity to Star Wars console games and launched a digital PC store called Origin that failed to get much market traction. Riccitiello stepped down in March 2013, shortly after the disastrous release of a rebooted SimCity that was criticized for bugs and online failures.

A co-founder of the private equity fund Elevation Partners alongside U2 singer Bono, Riccitiello was also the subject of a lawsuit in 2019 from a former Unity vice president, who accused him of sexual harassment and characterized the company’s culture as “highly sexualized.” Riccitiello and Unity denied the allegations.

AppLovin is offering $58.85 a share for the gaming technology platform, an 18% premium to Monday’s closing share price. According to terms of the offer, each share of Unity common stock would be exchanged for 1.152 shares of AppLovin Class A voting common stock and 0.314 shares of a newly created non-voting Class C stock. Unity shareholders would control 55% of the combined company and 49% of the voting rights.

The proposal would allow for AppLovin’s Class B shares, which KKR owns a chunk of, to be converted to Class A shares.

The combination of AppLovin and Unity would generate estimated adjusted earnings before interest, tax, depreciation and amortization of more than $3 billion by the end of 2024, “and would be in the best interest of shareholders of both companies,” Foroughi said in the statement.

AppLovin is being advised by JPMorgan Chase & Co. and Wilson Sonsini Goodrich & Rosati.

(Updates with comment from CEO in the seventh paragraph.)