Strong Apple earnings across the board: Synovus' Dan Morgan

Apple Inc. slipped as much as 2.9 per cent in late trading after warning that sales growth may be slowing and supplies are getting tight, putting a damper on investor excitement following a record-setting third quarter.

The company said on a conference call Tuesday that supply constraints will affect the iPhone and iPad in the current quarter. Decelerating demand for services also will drive the slowdown. Apple declined to provide specific revenue forecasts, a practice it adopted during the pandemic.

The cautious remarks followed a sales gain of 36 per cent in the third quarter, with revenue of US$81.4 billion shattering Wall Street’s US$73.8 billion estimate. But investors are sticking to a wait-and-see attitude. The parts shortages and a patchwork of COVID restrictions will continue to weigh on Apple’s business this year. 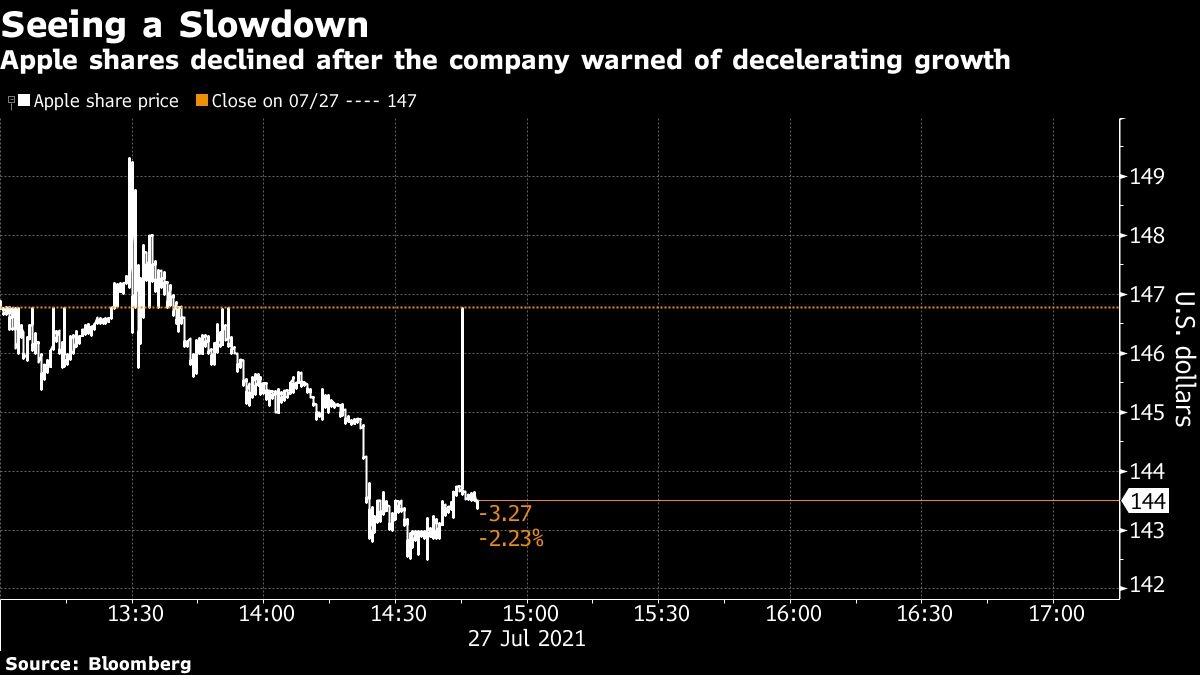 The Cupertino, California-based company’s lack of specific guidance for the fourth quarter continued a trend it started when COVID-19 first struck in 2020. And Apple isn’t unique. Many businesses have curtailed their outlooks in the face of pandemic uncertainties.

For now, business is booming. The iPhone, Apple’s core product, grew about 50 per cent to US$39.6 billion last quarter, beating projections of US$34.6 billion. The third quarter is typically one of Apple’s slowest periods -- with consumers holding out for new phone launches around September -- but the 5G iPhone 12 appears to have helped the company buck that trend.

And the company still expects “strong” double-digit growth in the fourth quarter.

“Our record June quarter operating performance included new revenue records in each of our geographic segments,” Chief Financial Officer Luca Maestri said in a statement. Apple continues to make significant investments to support long-term growth, generated US$21 billion of operating cash flow, and returned US$29 billion to shareholders during the third quarter, he added.

Apple reported US$7.37 billion, or 12 per cent growth, in revenue for the iPad, topping expectations of US$7.13 billion. Apple debuted new iPad Pro models in April, but the line was constrained due to problems building new screens for the larger models. For the Mac, Apple reported revenue of US$8.24 billion, or growth of 16 per cent, exceeding the US$8 billion estimate.

Apple previously warned that third-quarter revenue would take a hit of US$3 billion to US$4 billion because of the chip shortage affecting some iPad and Mac components. Earnings for the third quarter were US$1.30 a share, compared with an estimate of US$1.01 a share.

Services revenue reached US$17.5 billion, above the the US$16.3 billion estimate and a third higher than the same period last year. That business is heavily reliant on sales from in-app purchases and third-party app downloads, and Apple recently decreased the cut it takes for most apps to 15 per cent from 30 per cent. The company has launched a slew of new services in recent years, including Apple TV+ and Apple Arcade, but it hasn’t said how those are performing.

Apple also saw its wearables, home and accessories segment grow 36 per cent to US$8.78 billion. That category includes the Apple Watch, AirPods, Apple TV, the HomePod and various other accessories. Apple hasn’t updated the AirPods earbuds since 2019, last year’s Apple Watch upgrades were minor, and this year’s Apple TV updates were focused on a faster processor and redesigned remote.

All of Apple’s retail stores reopened as of June, and the company has also started a hybrid program to help staff work from home or stores with more flexibility.

As economies have continued to reopen due to vaccines, demand for Apple devices has generally increased. However, with COVID cases again rising and the chip shortage continuing, challenges are expected to persist through the holiday season.

The emergence of the COVID Delta variant has already led Apple to push back an employee office return mandate by at least a month, and it has reinstated masking rules inside of retail stores.

Even with the muted reaction to the results, Wedbush Securities analyst Dan Ives said they should help lay the groundwork for Apple to reach a US$3 trillion market value over the next year. The stock has climbed 11 per cent so far this year, giving it a valuation of about US$2.5 trillion.

“We would characterize this as a ‘gold medal’ performance by Apple during the quarter especially when considering the chip shortage,” he said.