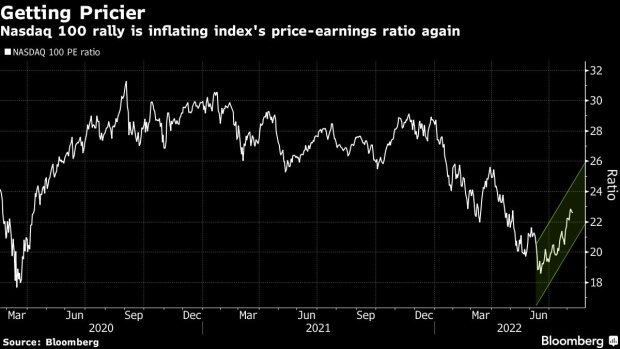 Visitors make their way into the Apple store on Fifth Ave during a heat wave in New York, US, on Wednesday, July 20, 2022. With temperatures rising into the 90s Fahrenheit, New York City and the Northeast heading into its longest heat wave of the summer. , Bloomberg

(Bloomberg) -- Apple Inc. is back in a familiar role as market leader after a painful first half of the year that saw hundreds of billions of dollars in market value disappear, and individual investors are a big reason for the rally.

Since bottoming in mid-June, the iPhone maker’s shares have surged 27%, outpacing the S&P 500 Index and the Nasdaq 100 Index. That’s put Apple back on top as the world’s most valuable company and within sight of turning positive for the year. Apple is now down just 7.4% in 2022, compared with a drop of 20% for the Nasdaq 100.

Apple shares benefited from a relief rally after its quarterly earnings were better than feared, and its ongoing buoyancy reflects Wall Street’s confidence in its ability to continue churning out big profits. Individual investors, who recently helped ignite rallies in speculative corners of the market, have flocked to the stock.

“Retail investors have been strong buyers of Apple over the past couple of months, first attempting to buy the dip, then buying into the recent recovery,” said Lucas Mantle, a data scientist at Vanda Research, which tracks investor positioning.

Apple has routinely ranked among the most purchased stocks among that cohort over the past month, according to data from Vanda Research.

Despite concerns about a potential recession in the US and risks related to supply chains in China, Apple’s profit estimates have stayed steady while those for other megacap companies and the technology industry more broadly have shrunk. The average earnings-per-share estimate for Apple next year has fallen less than 1% over the past month, compared with a drop of about 4% for Microsoft Corp. and 7% for Amazon.com Inc., according to data compiled by Bloomberg.

Mom-and-pop traders are no doubt attracted to Apple’s massive cash flows that have allowed the company to return more than $80 billion to shareholders in the form of dividends and share repurchases in the first three quarters of this fiscal year.

The price for a piece of that cash geyser, however, doesn’t come cheaply. Apple is trading at 26 times profits projected over the next 12 months, well above the 10-year average at 17 times. By contrast, the S&P 500 is priced at about 17.5 times earnings.

Apple, with a market value of $2.6 trillion surpassed oil giant Saudi Aramco again in July to become the world’s largest company. It’s 14% away from the $3 trillion valuation that seemed a nearly impossible milestone just a couple months ago.

Tech Chart of the Day

The Nasdaq 100 has rallied 17% from its June low as technology stocks stage a gradual rebound. The tech-heavy index now trades at about 23 times forward earnings, up from a 27-month low in June of 18.6. However, it still trades about 28% cheaper than its September 2020 high.