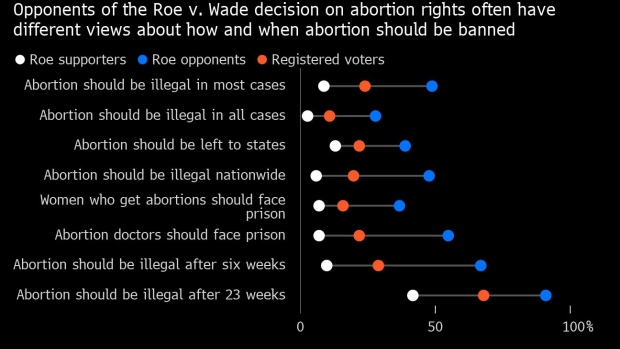 (Bloomberg) -- Abortion opponents, having secured their decades-old dream, are finding they don’t all agree on what to target next.

Now that the US Supreme Court has overruled the landmark Roe v. Wade decision, anti-abortion advocates have to hash out details in states and courtrooms, such as whether to punish women for getting the procedures, put limits on abortion medication or do away with exemptions for rape and incest victims or even to save the mother’s life.

Unlike the singular focus of the 49-year drive to overturn Roe, there are divisions as to the next steps.

“We have the same goals but different perspectives, different denominations, different ages,” said Sue Swayze Liebel, state policy director of Susan B. Anthony Pro-Life America, an anti-abortion political action committee. “There have really been some factions, particularly within the last five or six years, that have been calling for some different things.”

The fissures have become more apparent as abortion opponents, encouraged by former President Donald Trump’s three conservative Supreme Court appointments, have rushed to introduce state legislation to further restrict abortion access -- there have been 43 restrictions enacted in 2022 so far, according to the Guttmacher Institute, a nonprofit that tracks abortion legislation and lawsuits.

The anti-abortion movement “is thousands of organizations that have very different missions,” said Jeff Bradford, president of the Human Coalition, a Texas-based organization that runs crisis pregnancy centers and coordinates services to expectant mothers. The various groups are impossible to count because they include church-affiliated ministries that don’t have to register as separate non-profits.

Polls show those who disagree with Roe split on fundamental questions: Should abortion be outlawed nationwide, or should the issue be left to the states? Should women who get abortions face prison time? Should there be exceptions for rape or the life of the mother?

One divisive issue in the anti-abortion movement is punishment. More than 70 organizations, including the National Right-to-Life Committee, said in an open letter to state lawmakers May 12 that they oppose proposals to impose criminal penalties on those who have abortions.

But other groups associated with the “abortion abolition” part of the movement believe the only way to end the practice is to prosecute everyone involved -- even the woman getting the abortion.

“We already have laws on the books that prohibit homicide. The abortion exceptions to those laws should be repealed, so that no one can take a life,” said Bradley Pierce, head of Foundation to Abolish Abortion, based in Liberty Hill, Texas. Pierce is an attorney who helped author an amicus brief to the Supreme Court abortion case that was just decided.

In Louisiana, a bill that would allow homicide charges against those who end pregnancies was pulled from consideration in May after anti-abortion groups clashed over whether the restrictions were too extreme and tried to amend the legislation. Louisiana Right to Life and Governor John Bel Edwards, an anti-abortion Democrat, opposed the original version of the bill because it didn’t exempt mothers from criminal charges.

“We should not be at each other’s throats over a bill that is blatantly unconstitutional, makes criminals out of women, and would not prevent a single abortion, and as far as I can tell was only presented to give a couple of misguided people a platform,” state Representative Alan Seabaugh, a Republican who sponsored efforts to weaken the bill, said on the House floor.

Abortion opponents have also taken different sides over making exceptions for rape and incest victims -- exemptions that were a given for decades and codified in 1980 under the Hyde Amendment, which prohibited use of federal funds for abortion except to save the mother’s life or in cases of rape or incest.

The policy is embraced more widely in the movement particularly when it comes to women impregnated against their will.

“Rape and incest are absolutely horrific tragedies, the worst events in a woman’s life,” John Seago, president of Texas Right to Life, said in an interview. “Abortion doesn’t undo any of the trauma or the violence done to those women. But justice for those innocent victims doesn’t require that on top of that violence is another act of violence -- going out of your way to cause the death of a child, who is also innocent.”

Overturning Roe has the potential to unleash battles on multiple new fronts. There are already proposals to bar people from traveling to out-of-state clinics for an abortion, which the Biden administration says it will fight.

There’s also an ongoing resolve by abortion opponents to make abortion illegal nationwide, with former Vice President Mike Pence tweeting Friday that “we must not rest and must not relent until the sanctity of life is restored to the center of American law in every state in the land.” Their efforts to do so may include pushing political leaders for federal legislation banning or limiting abortions, or pursuing efforts in states that still allow the procedures to approve restrictions.

There are also questions about whether states that outlaw abortion may try to block receipt of mail-order pills -- mifepristone and misoprostol -- that can end a pregnancy. Attorney General Merrick B. Garland said following the ruling that states “may not ban Mifepristone based on disagreement with the FDA’s expert judgment about its safety and efficacy.”

Anti-abortion groups are also divided about whether to provide more financial assistance to pregnant mothers and young parents.

“This is a generation that wants to see real limits and tangible support,” said Kristan Hawkins of Students for Life, which represents younger people, who she says are more likely to know a peer facing an abortion decision.

Young activists want to see more focus on helping parents care for children after they are born. Liebel said there’s a decades-long tradition of charitable work, including a network of almost 3,000 pregnancy and women’s care centers throughout the country.

“When I talk to states about Roe v. Wade and what they’re going to do in response, I always couple that with you have to build out your services and support to women and families,” she said. And that involves both public and private sector support, she said. One model is Texas, which last year allotted $100 million to the Alternatives to Abortion Program.

Jennifer L. Holland, a historian at the University of Oklahoma who has studied the anti-abortion movement, questions whether the groups are prepared for the dynamics they will encounter in a world without Roe.

“The movement, from at least what we know historically, was not really planning for a post-Roe moment,” Holland said. “Because abortion was the ultimate evil, and they tied so many other social issues to abortion, the thinking was that if you get rid of Roe, you solve all the problems.”