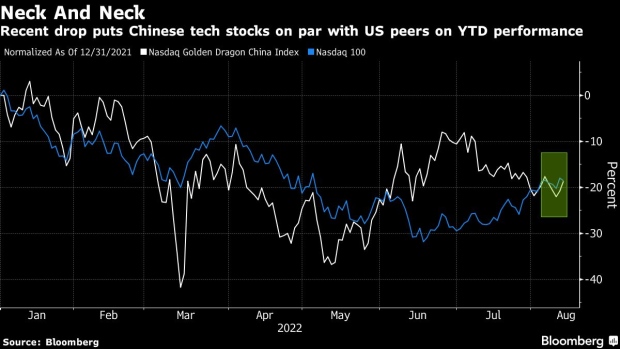 (Bloomberg) -- US-listed China stocks were volatile on Friday after some of the Asian nation’s largest state-owned companies announced plans to delist from American exchanges amid a spat over audits and generally worsening tensions between the world’s top two economies.

China Life Insurance Co., PetroChina Co. and China Petroleum & Chemical Corp. were among the decliners on the Nasdaq Golden Dragon China Index after they all disclosed their intentions to delist. The three firms all fell 1.5% or more on Friday. The sudden announcements also sparked a slump in Alibaba Group Holding Ltd. and Pinduoduo Inc. which both ended the day lower. The Golden Dragon Index slumped as much as 2.8% during the trading session before a late in the day reversal drove the gauge 0.2% higher.

About 200 Chinese companies, including Alibaba and Baidu Inc., are listed in the US and are likely to face delisting threats because American regulators aren’t able to verify their financial audits. State-owned enterprises are deemed able to obtain information and data that the Chinese government may be hesitant to give foreign regulators access to, said Redmond Wong, a market strategist at Saxo Markets.

Ride-hailing giant Didi Global Inc. announced plans in December to delist from the New York Stock Exchange, under pressure from Chinese regulators who feared the company’s vast troves of data would be exposed to foreign powers. Alibaba recently said it will seek a primary listing in Hong Kong.

“This has been an overhang on Chinese ADRs,” said Jian Shi Cortesi, investment director at GAM Investment Management in Zurich. “We expect more Chinese firms to voluntarily delist from the US or move their primary listings to Hong Kong.”

The US and China have been at odds for two decades over allowing American inspectors access to the audit work papers of Chinese companies and negotiators have yet to hammer out an agreement.

Those worries and a regulatory crackdown on technology firms by Beijing has put pressure on the Nasdaq Golden Dragon Index, which is down 65% from its all-time high reached in February last year. The index, home to the likes of Alibaba and Bilibili Inc., has however managed to bounce back by 40% from this year’s bottom.

The delisting news “will impact investor sentiment towards ADRs,” said Daisy Li, a fund manager at EFG Asset Management HK Ltd. “People hold a quite bearish views on ADRs thinking it is unlikely that an agreement on the auditing issue can be reached.”