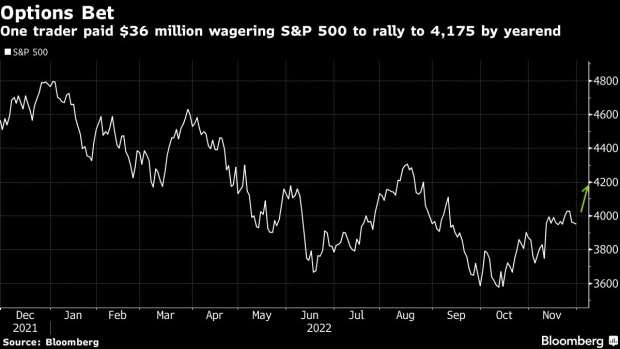 (Bloomberg) -- One trader spent about $36 million on a bullish options wager tied to the S&P 500’s level over the next month, a trade that got a major boost when stocks surged Wednesday.

“It’s a plain vanilla call purchase,” said Alon Rosin, Oppenheimer & Co.’s head of institutional equity derivatives. “It could be a macro/hedge fund running net short and using this as a year-end hedge or HF running low gross/net exposures concerned about underperformance if the market bounces ahead.”

In early afternoon, a separate transaction went off, this time involving a purchase of about 7,000 calls on the S&P 500 maturing at the year’s end with an exercise price at 4,150. At a cost of $21.60 each, the contract almost tripled to finish the session at $60.60.

Credit all the windfall to Federal Reserve Chair Jerome Powell, whose comments on a possible downshift in the rapid pace of tightening as soon as next month’s meeting sparked a jump in stocks, with the S&P 500 erasing earlier losses. The index has rallied more than 10% from its October trough in part on optimism such a move could occur.

During the post-Powell rally, a separate investor sold puts on the S&P 500, likely closing a position, while buying calls. The trade included the disposal of 27,000 puts expiring in January with a strike price at 3,600 and the purchase of roughly 9,000 calls maturing on Dec. 30 with an exercise price at 4,200. With an initial premium of $27 each, the calls closed at $40.50.

“I don’t think this really changes the fundamental backdrop,” Allread said. “The S&P did seem to hold yesterday’s lows, but the bump is probably shorts covering and people being a little too happy about Powell’s comments.”

Thanks to this year’s brutal selloff, fund managers of all stripes have cut their equity exposure, with data from Morgan Stanley’s prime brokerage unit showing hedge-fund net leverage sitting in the 14th percentile of a five-year range. While some Wall Street strategists warned the worst is not over, the latest stock rally, along with historically favorable year-end patterns, may have prompted some investors to chase gains through options.

Such buying of bullish options in turn helped add fuel to the market’s upside as dealers on the other side of the transactions needed to snap up stocks to maintain a market-neutral stance.

“This investor could be under-invested (or short) and wants to be protected against a Santa Claus rally into year end. Or they could just be making a bullish bet on one,” said Chris Murphy, co-head of derivatives strategy at Susquehanna International Group. “Volumes are lighter in general recently as investors appear to have less conviction in either direction at current levels, so trades are having more of an impact in general.”

--With assistance from Melissa Karsh.