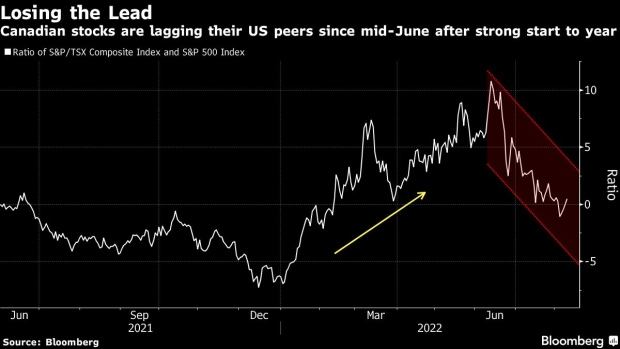 Lesley Marks, chief investment strategist for Canada at BMO Private Wealth, speaks during an interview in Toronto, Ontario, Canada, on Thursday, March 12, 2020. AGF Management CEO Kevin McCreadie said that small and medium-sized businesses are at particular risk if they're not given enough access to loans in an economy with a cash crunch. , Bloomberg

(Bloomberg) -- One of Canada’s largest asset managers is paring its wager on the country’s stock market amid growing concern that a global recession could weigh more heavily on the nation’s shares.

Mackenzie Investments, which oversees C$196 billion ($152 billion), downgraded its position on Canadian equities to neutral from overweight last week, citing concerns that efforts by policy makers around the world to stave off rising prices will drag down economic output.

“A lot of the cues that we’re seeing around the global economy, including the commitment to fighting inflation with higher interest rates and the speed at which the interest rate moves are happening, made us more cautious about the extent of the slowdown,” Lesley Marks, Mackenzie’s chief investment officer of equities, said in an interview. “Canadian equities -- given their more highly cyclical nature -- could underperform.”

Marks said Canada is particularly vulnerable to a slump in global commodity prices, which are already showing signs of weakness. Energy stocks have tumbled from their peak earlier this year and could continue to slide as consumer demand for oil and gas slumps, Marks said.

In addition, a chill has fallen over Canada’s once-scorching housing market, a critical part of the nation’s economy, as mortgage rates surge. Canadians tie their level of wealth to their homes and, as prices fall, so will consumer willingness to spend on big ticket items, denting earnings, she added.

“Housing prices have corrected significantly over the last four months and that has an impact on the balance sheet of Canadians, but also on consumer confidence,” Marks said.

At the same time, Mackenzie is boosting its outlook on US shares to neutral from underweight. While Canada’s benchmark S&P/TSX Composite index has handily outpaced the S&P 500 this year, the growth-stock heavy US gauge has been regaining ground in recent weeks amid better-than-expected earnings, narrowing the gap between the two to the smallest since February. The S&P/TSX is about 8% lower this year, while the S&P 500 has slumped 14%.

Still, others see Canadian stocks continuing to outperform in the coming months.

BMO Capital Markets’ chief investment strategist Brian Belski has maintained his 24,000 year-end target on the S&P/TSX -- an upside of more than 20% -- saying that investors have already priced in a potential recession.

“A hawkish Bank of Canada fighting elevated inflation, record-setting gas prices, and rising concerns of recession have many investors cautious on the consumer discretionary sector,” Belski wrote in a note last week. “While these risks are certainly meaningful headwinds for the consumer, our work shows they have been largely priced in, with the sector reaching extreme levels of underperformance in early July, while valuations have normalized to historical averages.”