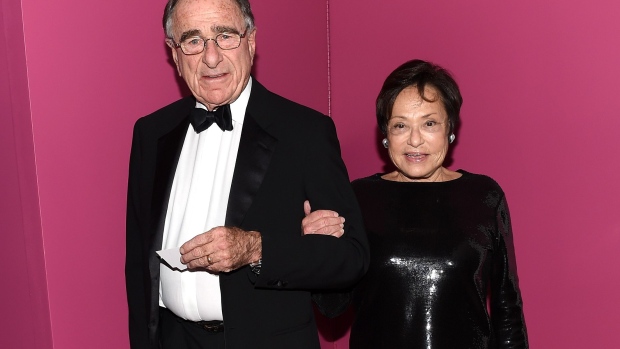 (Bloomberg) -- A multi-year saga came to a close on Monday night at Sotheby’s New York, where the final tranche of artworks from the divorced octogenarians Harry and Linda Macklowe brought in $246.1 million.

Together with the $676 million auction of the first batch of their collection last November, the former spouses’ 65 artworks totaled $922.2 million, making it retroactively one of the most valuable art collections in the world, and, Sotheby’s claims, the most valuable collection to ever sell at auction.

The sale itself came about as the result of a bitter 2018 divorce between Harry, a billionaire real estate developer, and his then-wife Linda.

“The art collection is the parties' most valuable marital property,” wrote New York State Supreme Court Justice Laura Drager in her 2018 ruling. “The parties hold significantly less in stocks or other investments compared to the value of the art collection. The Husband credibly testified that the art enabled diversification and was an alternative investment form.”

Drager ruled that Linda could keep more than half of the artworks, with a total value of just under $40 million, given that both sides’ valuations of the pieces were relatively in-line. The rest represented the bulk of the collection’s worth, but the pair disputed its value—Linda argued it was worth $625 million, Harry argued it was worth $788 million. So Drager ordered it sold: only the market, she wrote, could determine its true worth. “In addition,” Drager added, “the sale will provide each party with needed cash to enable them each to enjoy their lifestyles.”

After Monday night, there’s much cash to support their lifestyles.

The 30 lots carried a total estimate of $167.6 million to $236.4 million. (Estimates are for the price where bidding ends, or what’s known as the hammer. But the sums reported here are what the buyers paid in total, which include auction house fees known as buyer’s premiums. These can add between 13.9% and 25% (the higher the price, the lower the premium) to the total sum.

The most expensive lot in the sale was a brooding color field painting by Mark Rothko from 1960. Painted in a range of dark reds and maroons against a blue background, the couple acquired the painting in 1983, according to the auction house. Estimated at $35 million to $50 million, on Monday night the auctioneer Oliver Barker began bidding at $30 million, and dragged it slowly up in $500,000 increments to a $41.5 million hammer. With premiums, it came to $48 million.

Other major lots included Gerhard Richter’s massive 1975 Seascape painting, which sold for $30.2 million, squarely within its $25 million to $35 million estimate, a 1986 Andy Warhol Self Portrait, estimated between $15 million and $20 million which sold for $18.7 million, and a Cy Twombly “chalkboard” painting, Synopsis of a Battle from 1960. Estimated between $12 million and $18 million, bidding began at $10 million and never really took off;  it hammered at $13 million, or $15.3 million with premiums.

It was a successful if not dazzling evening sale for Sotheby’s, and the first of a week of auctions in which it hopes to sell some $1.18 billion worth of art. Next is its Modern Evening Auction, where 61 scheduled lots are expected to be sold for as much as $443.4 million.